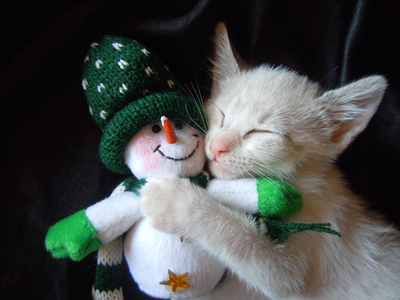 Cats are given far less attention in this world than dogs are. Dogs are man’s best friend, and cats are well…just cats. That being said, we’d like to take a look at why cats are put on a pedestal less so than dogs, and what a better day to do that than Hug Your Cat Day right Brooklyn?

Where do they come from?

Cats obviously come from wild cats in nature, and most genetic research indicates thus far that they originated from a single felid species out of West Asia around 8,000 years ago. After this, the Egyptians are credited with most of the deification and domestication of the species, and since that time, cats have grown in popularity and population to become the most common form of pet in existence.

Divergent from the story of dogs which started associating with humans, potentially even hunting in congress with them anywhere between 20,000 – 50,000 years ago. Dogs most likely became attached with humans due to the common prey sources they shared together, eventually forming a symbiotic relationship that hasn’t separated since. Cats on the other hand were specifically bred to be what they are now.

Why are they so popular?

The jury is still out on this one, but there are various reasons as to why cats have become the world’s most prolific house pet. For one, they are great at killing pests, and anything else that is within their size range. This made them ideal for vermin control, and at the same time provided their food source too making them easier to take care of effortlessly.

Additionally, cats can provide their owners with a sense of connection and companionship that requires less maintenance than a dog. Cats are essentially self-contained, autonomous rulers of their own destiny, and this makes them enviable from a human perspective. Their nocturnal nature gives them a sense of mystery that dogs don’t and will never have.

What isn’t new with cats today? Everything from why they like boxes down to their nightly habits are just beginning to reveal themselves to researchers. As it turns out, cats are such incredible animals that even if they are abandoned, they will be perfectly fine on their own in most instances, and this is even a problem in some areas where abandoned cats have gone feral and produced whole generations of feral cat offspring that then go on to do the same in short order. Cities like Brooklyn and the greater New York area have programs in place that send out experts into the streets who then capture the feral cats, neuter and spay them, and then return them to their original location. This reduces the feral cat population in the city and at the same time is still humane to man’s second best friend.

So if you don’t have a cat, then you can now appreciate how ingenious and crafty they can be. And if you do have a lovable furry friend, then hug them for us, and remember that any good disaster plan includes your pets.